I am kind of in shock that it’s already been two weeks since we got back from Barcelona, it honestly feels like we landed two days ago…jet lag is for real folks! I’m finally getting down to business though and have put together the following recap of our trip and to share the wonderfulness that is Barcelona.

First off a quick shout out to AMA for helping us out and organizing a fantastic trip that ran smoothly from start to finish. If you’re a regular follower of the blog, you may remember my moment of rage when initially trying to get things sorted out, but that has all but been forgotten.

Travelling overseas is always a bit of a hassle because of the crazy long and painful flight, but we flew KLM and were really impressed. It’s still just plane so keep your expectations moderate, but all of our flights were perfectly on time, and they feed you, like a lot, and even offer free booze. Perks! There’s no free WiFi, but the in-flight entertainment had a big selection of movies and games. There’s a direct flight from Edmonton to Amsterdam (that has been available for really low prices so keep your eyes open), and then it was just a quick flight to Barcelona. The Amsterdam airport is pretty big, and we had a bit of a layover on the way there to explore but our connection on the way back was tight, so we had to hustle…the only stressful part of the flights.

Once we got to Barcelona, we jumped on the bus (they have a cheap airport shuttle that went right close to our hotel) and went to our hotel to get settled. We stayed at the H10 Urquinaona Plaza which I have no qualms about recommending to anyone. It was only a couple of blocks from ‘Las Ramblas’, which is the big touristy spot in Barcelona, and we were able to walk to almost everything we wanted to see. Our room was also pretty spacious with a king size bed and a small balcony with a beautiful view of the Plaza. If you happen to stay at the hotel, I would request a room that faces the square instead of one of the interior rooms as those looked to be much smaller.

Boring stuff over, now onto all the sights….and all the pictures 🙂

Barcelona is known for its architecture, and Sagrada Familia is by far the most famous, so of course we had to visit. I actually studied some of Gaudi’s work in a random art history class I took in University but trust me when I say that pictures do not do this place justice. The details in the stonework are ridiculous, the ceilings are so high, and it’s so bright and open inside compared to any other church I’ve been in. We went on an organized tour (with a guide who looked like a young Robert De Niro), and it included a trip up one of the towers. There’s an elevator that takes you 65m up, and then you climb down a tight staircase back down to the ground. The views on the way down are beautiful (top right and bottom left below) and make it a worthwhile add-on. Sagrada Familia is still under construction (has been since 1882) but they are hopeful it will be finished in 2026 (the 100 year anniversary of Gaudi’s death). I would love to go back when it’s all completed to get another look. 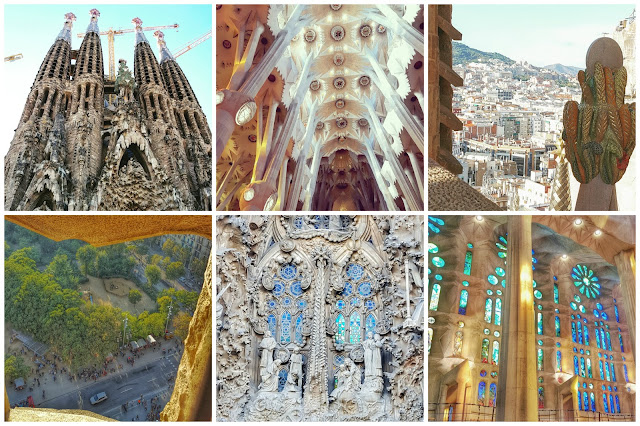 The second organized tour we took was up to Montserrat, a monastery built up in the mountains on the side of a cliff. We did a tour that included the cog train ride up, which was pretty cool and looked to be an easier ride up than the bus. We did, however, bus back down and the road is steep and twisty; I’m known to get car sick sometimes but survived the trip and was happy to do it. The views are beautiful, and the monastery itself is an impressive feat…how they built such an intricate building in that location blows my mind. Make sure to grab some cheese from the sellers along the road, we brought a couple of blocks back home with us (so delicious!) 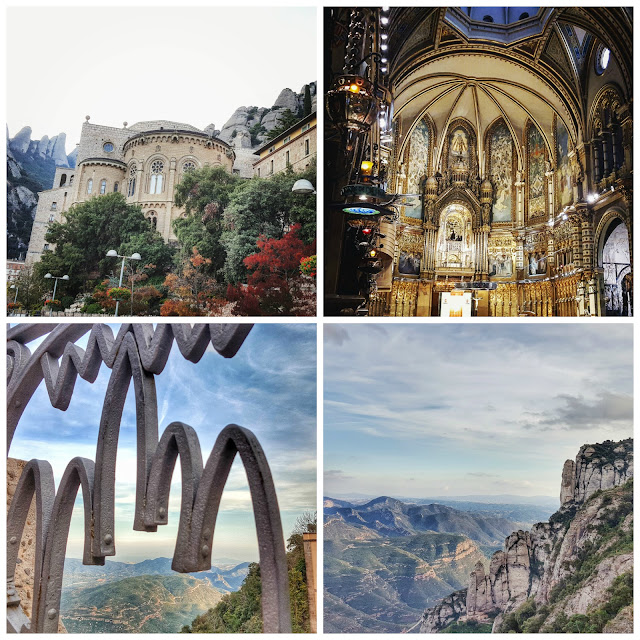 We also had to pay a visit to Park Guell, another attraction that showcases Gaudi’s unique architecture. It was crazy windy the day we went, but that didn’t take away from the whimsical design that is featured throughout the Park. There is a free access area with hiking trails up in the hills, but you really want to buy tickets and get access to the monuments section to really get the full impact. I loved all the detailed mosaics, they’re so colourful and fun. 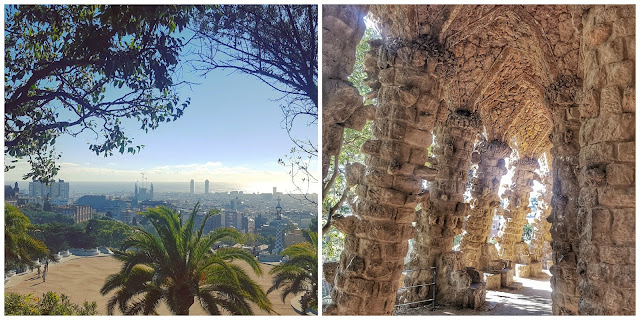 We had a total of eight days in Barcelona which sounds like a long time for one city, but we were busy every day and never ran out of things to see. On our second last day, we actually did a hop-on-hop-off double-decker bus tour so that we could see all the sights we hadn’t made it to. We did the tour on a Sunday which worked well because the city really grinds to a halt on Sunday with most businesses closing up, but all the tourist attractions are open. The tickets were kind of expensive, and you could easily use public transit (the bus or metro) to make your way around the stops, but the bus tour made things easy and efficient. Here are just a few highlights we made stops at: 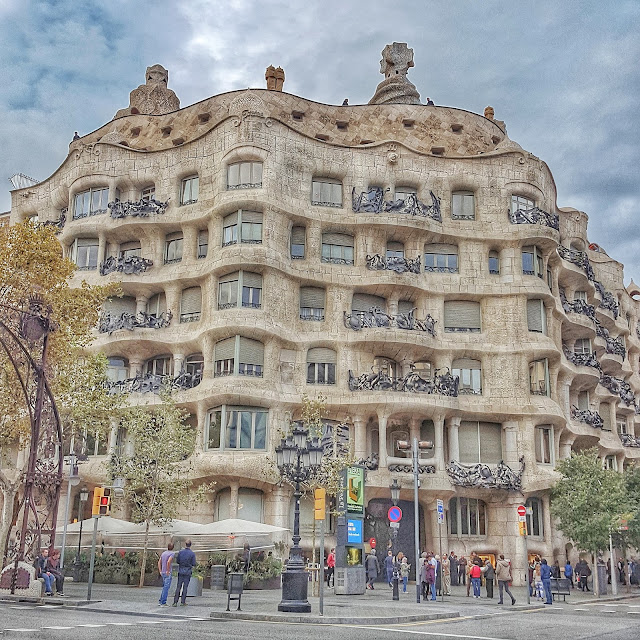 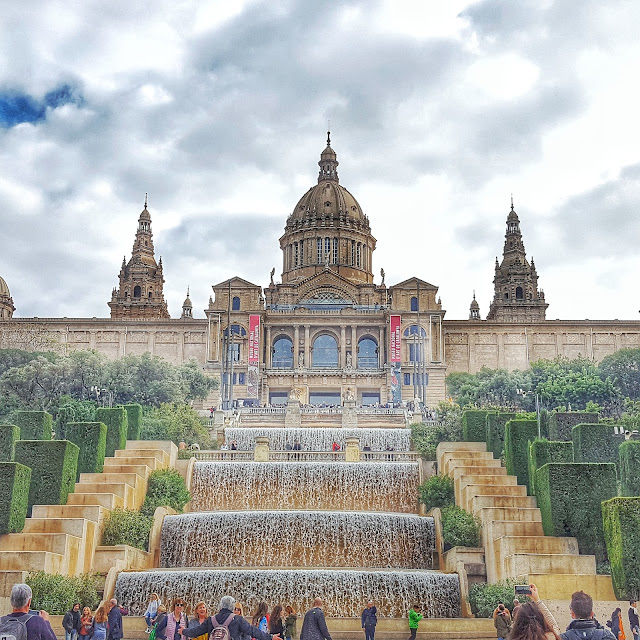 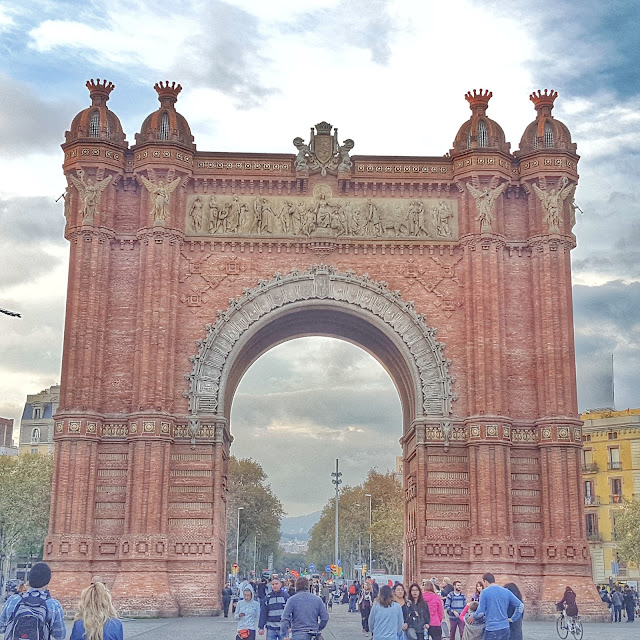 A must visit (another one) in Barcelona is the Mercat de Sant Josep de la Bouqueria, which is a huge food market situated along Las Ramblas. If you’re any sort of foodie or just like to eat this is the place to be! It’s overflowing with local vendors featuring everything from fresh seafood to cured ham, to handmade marzipan. You HAVE to grab one of the fresh juices (lots of stands have them), and the displays look so stunning with their bright colours…I may have had two, and if I could bring one thing from Barcelona to Edmonton, it would 100% be those juices. There’s also a bunch of tapas restaurants within the market, and it’s a great way to grab a quick bite. 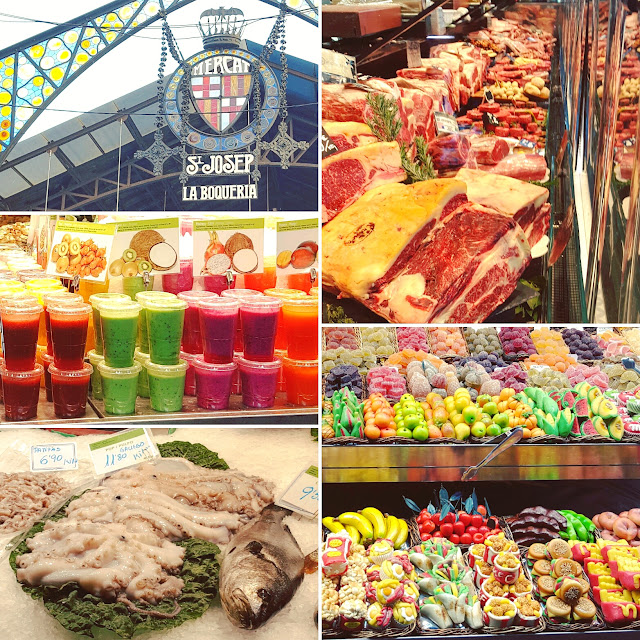 When you travel with a guy with a not so slight obsession with fish tanks you have to make a visit to the aquarium. It wouldn’t ever be at the top of my must-do list, but I was actually pretty impressed. There are a ton of tanks featuring all sorts of fish and sea animals and a huge underwater tunnel with sharks and stingrays. And they had penguins, who doesn’t love penguins? 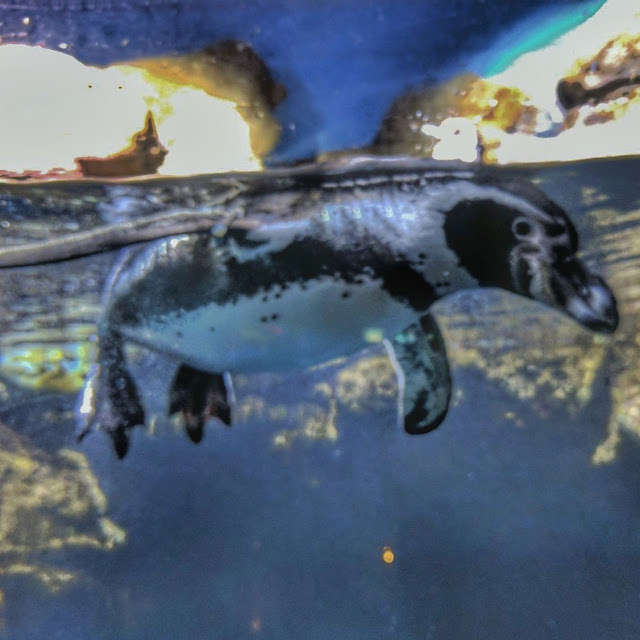 One of my favourite things about Barcelona were all the tiny, intricate alleyways in the Gothic Quarter that are lined with shops and restaurants. You could walk for hours (and we did) up and down alleyways and never find your way back to where you started. It’s such a unique layout for a city (nothing like the big wide, non-pedestrian friendly streets of North America) and I absolutely loved the old school charm. There’s also graffiti art painted on many exterior doors so even when stores are all locked up it still feels really welcoming. 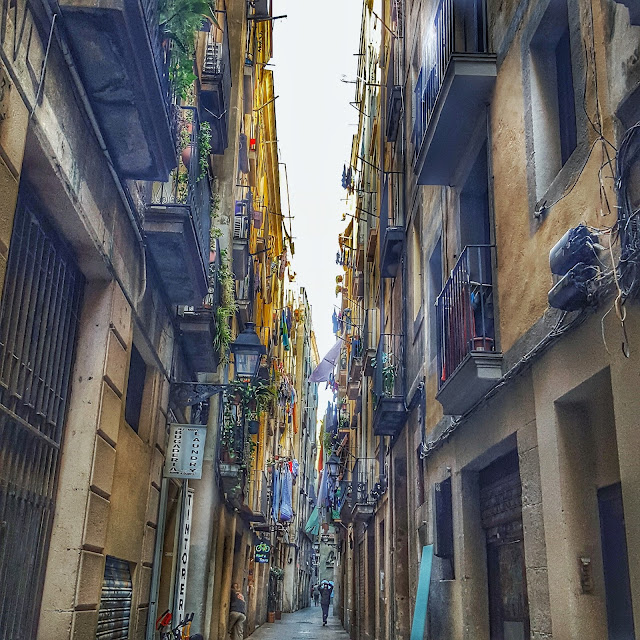 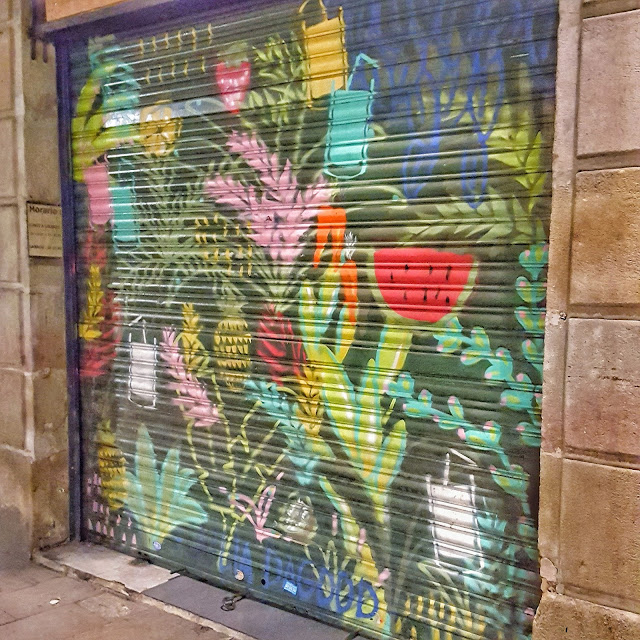 Probably the only part of Barcelona that was a bit of a let down was the food. I shouldn’t be surprised though as Spain is known for its Paella and that’s just not really my thing. Obviously, we ate some, and it was tasty, but even the best Paella in the world won’t make it to my top foods list. They did, however, have giant jugs of Sangria, and you can’t go wrong with that. We also ate our body weight in tapas over the trip, and I became hooked on the croquettes that you could find everywhere. This isn’t to say we didn’t have great meals during our stay, we had some really yummy sushi and a delicious burger at an Irish pub (because sometimes when you’re hangry after a long day of exploring you just need a burger)

Have you ever been to Barcelona? If so, what were your favourite parts? Any upcoming travel plans?

How to Survive Your First FinCon